What Are Fossil Fuels?

Fossil fuel is a hydrocarbon-containing decomposed material formed underground from the remains of dead plants and animals millions of years ago that is burned to release energy for use.

Fossil fuel industries extract these energy sources through drilling or mining,  burning them to generate electricity, or refining them as heating or transportation fuel.

Because fossil fuels are non-renewable, their supply is finite and will ultimately be depleted.

Fossil fuels are essential because they can be used to provide large amounts of energy per unit of mass when burned at high temperatures.

Around 90% of the electricity demand is satisfied by fossil fuels. This energy has provided the majority of the energy necessary to push our automobiles, power our companies, and power our houses.

Additionally, they are utilized to manufacture plastic, steel, and various other materials.

Fossil fuels provide the United States with 81% of its total energy. They are used to heat homes, run vehicles, power industry, manufacturing processes, and provide electricity.

There are three types of fossil fuels: 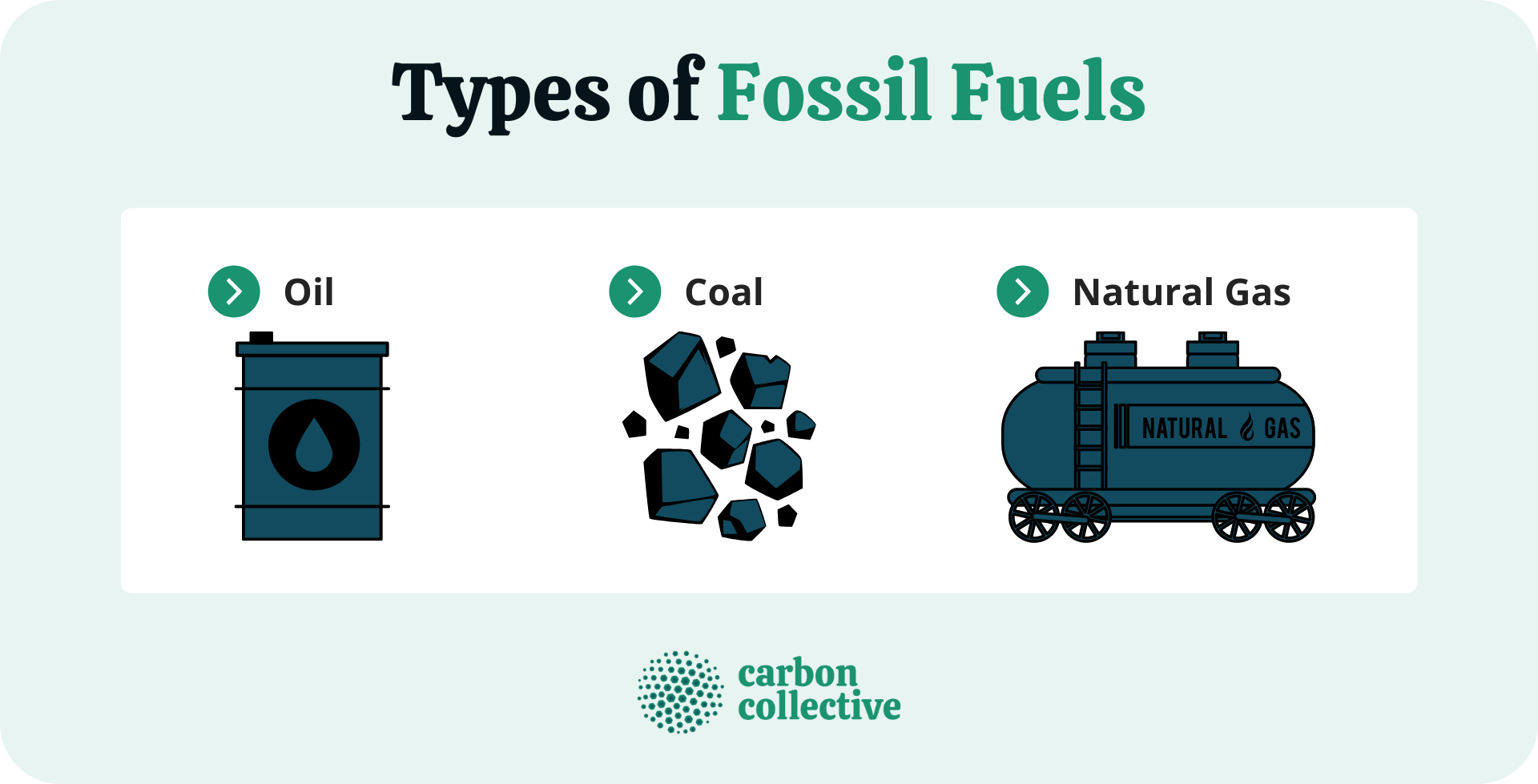 Oil is the most widely used fossil fuel, and it is a liquid fossil fuel formed from the remains of marine microorganisms deposited on the seafloor.

These deposits land in rock and sediment, trapping the oil in small spaces after a significant time. Large drilling platforms can extract oil.

Coal is quite an abundant type of fossil fuel. It is a solid fossil fuel formed over time by the decay of land vegetation; deposits become coal when layers are compacted and heated over time.

Coal is a dense, carbon-rich rock classified into four distinct types based on its carbon content: lignite, sub-bituminous, bituminous, and anthracite.

However, regardless of the kind, all coal is polluting. As it turns out, it's the most carbon-intensive fossil fuel we can use.

Like oil, it is formed from the remains of marine microorganisms and is brought to the surface by drilling. Natural gas has been a relatively new energy source as more developing countries use it.

Natural gas is largely made up of methane, so it's either "conventional" or "unconventional," depending on where it's found underground.

Conventional natural gas is found in porous and permeable rock beds or mixed with oil reservoirs, and it can be found by drilling.

The term "unconventional natural gas" refers to any gas that is too hard or expensive to get through regular drilling. It needs to be stimulated with a particular method, like fracking.

Despite the immense benefit these energies provide to humans, it costs not just our health but has dramatically impacted our planet. Coal, oil, and natural gas have contributed to pollution and global warming.

Carbon dioxide emissions from coal combustion account for 44% of worldwide totals and are the primary contributor to the global temperature rise over pre-industrial levels.

Coal usage has declined in the United States and worldwide due to the health and environmental effects and competition from inexpensive natural gas.

Pollution caused by global warming has no bounds. It penetrates the atmosphere, travels throughout the world, and retains heat in the earth's atmosphere for 50–200 years after release.

Other Forms of Air Pollution

Fossil fuel-powered automobiles, trucks, and boats are the primary source of lethal carbon monoxide and nitrogen oxide, which contribute to smog (and respiratory ailments) on hot days.

Absorbing carbon dioxide (CO2) from the atmosphere causes a long-term decrease in the pH of the ocean.

Increased CO2 levels in the atmosphere due to human activity have a direct chemical influence on ocean waters.

Burning oil, coal, and gas alters the ocean's fundamental chemistry, increasing its acidity. Ocean waters can absorb up to a quarter of all carbon emissions produced by humans.

The burning of fossil fuels is the primary source of global warming, which contributes to ocean acidification, leading to the death of even more marine life.

Though the benefits these fuels provide humans are invaluable, using them has a high cost on our planet. When using these fuels, consider the many costs and benefits.

Further, we need to move toward cleaner and renewable forms of energy by decreasing the use of oil, coal, and natural gas.

Despite the negative impacts on our planet, fossil fuels are not going away anytime soon. Instead, we need to find a way to decrease air pollution and global warming emissions from these sources.

1. What are fossil fuels?

Fossil fuels are natural resources formed over millions of years from the remains of plants and animals. These fuels form when plants and animals die. They are buried under sediment and are exposed to heat and pressure over time. They can be found worldwide in various forms, most frequently in oil, coal, and natural gas.

2. Why are fossil fuels used?

Fossil fuels are primary sources of energy. They power cars, homes, and businesses through combustion (i.e., burning) and provide heat for cooking or keeping warm.

3. How do fossil fuels impact our environment?

4. How do fossil fuels contribute to global warming?

5. What are some alternatives to fossil fuels?