What Is a Power Grid?

The power grid is the network of electrical power lines that connects all homes, businesses, and other electrically powered devices to ensure an adequate generation and distribution of electricity.

It can take on many forms: underground, above-ground, underwater, and so on. They may also consist of hundreds of thousands of miles of wire.

According to the U. S. Energy Information Administration, large amounts of energy cannot be stored; therefore, the electricity produced must be used.

Because of this, the power distribution grid must quickly shift demands. This approach ensures a steady flow of electricity and continuously produces and delivers electricity from the source to the destination.

The grid has been called the largest machine in the world, consisting of 7,700 power plants, 3,300 utilities, and over 2.7 million miles of power lines.

How Do Power Grids Work?

A power grid works by transporting electricity from where it is generated (such as power plants) to nearby homes or businesses.

It consists of transmission lines, substations, and distribution lines/lines that go directly to homes.

Grids move the electricity where it needs to go, often hundreds of miles away.

They also deal with sending out the right amount of electricity around your neighborhood, cities, or region.

Moreover, power grids are essential to today's society. So, they must be able to meet the current and future needs of the growing population while also being efficient, reliable, and safe. 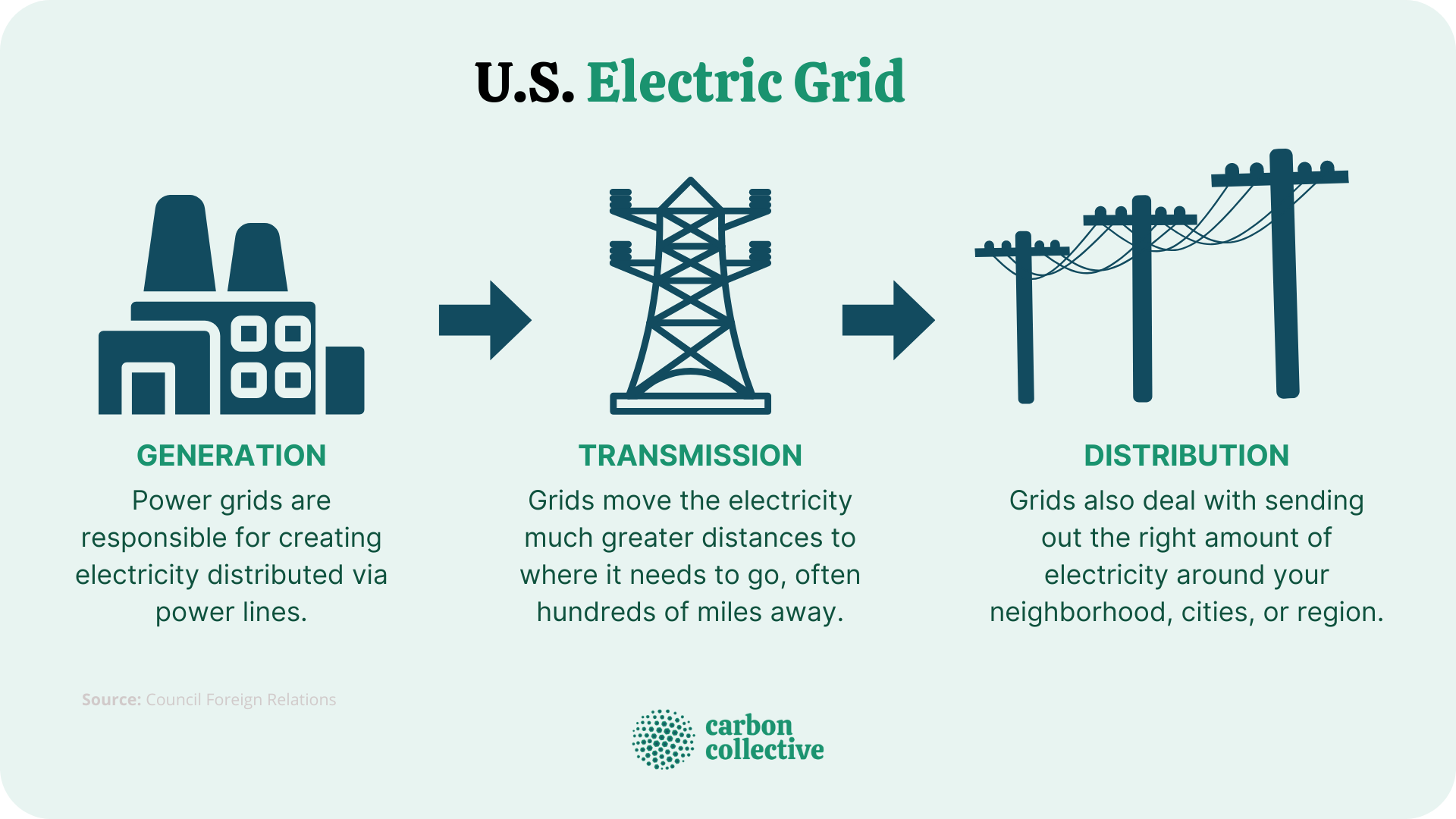 Many vulnerabilities can affect a power grid, including cyberattacks, solar flares, and terrorist attacks on infrastructure. Power grids present a clear and present danger to national security.

Since power grids are essential to society, it would be incredibly devastating if one were destroyed.

Recent investments in cyber security and other technologies will help power grids become even more reliable and ensure their safety from these threats.

How Are Renewable Energy Sources Affecting the Power Grid?

Power grids face challenges due to increasing penetration by intermittent sources, such as wind and solar power.

Power companies want to use more of these sources because they do not produce greenhouse gas emissions or release pollutants into the atmosphere.

Investment is required so power grids can transmit electricity from renewable sources and build new power plants that can ramp generation up or down in response to changes in renewable production.

Power grids need to ensure they can provide power no matter what happens on the grid.

This might include more support for renewable sources, building faster and more flexible generation plants, or having backup systems for maintaining voltage levels if there is a loss of generation.

What Is the Smart Grid?

It is an electricity network that enables a two-way flow of electricity and data with digital communications technology that allows detection, reaction, and proactive changes in relation to usage and multiple issues.

It can mean everything. From an improved and modernized power grid infrastructure to advanced sensors and appliances that communicate with the utility company and/or each other to provide detailed data about usage.

There are two types of smart grids: re-envisioning the conventional power grid infrastructure and systems; and enhanced appliance-to-appliance communication.

This refers to an overhaul of modernized equipment, such as new sensors and controls at the utility company's grid end. This is often referred to as "smart meter" or "advanced metering infrastructure (AMI)".

These devices can provide real-time data on how much electricity is being consumed, where it is coming from, and when it will arrive.

By receiving more information about their energy usage patterns, utility companies can quickly adjust to unexpected changes in demand while allowing consumers to be more energy-efficient.

The smart grid could also play a role in integrating intermittent renewables into the grid.

The smart grid provides information on electricity production that can allow grid operators to match demand with supply, decrease the risk of curtailment, and increase renewable penetration levels.

The second type of smart grid, enhanced appliance-to-appliance communication, is also referred to as "the internet of things".

This would entail expanding existing technologies, such as automated thermostats, to improve energy efficiency in homes and buildings by using meters to determine the most efficient times for appliances to turn on or off or adjust their energy use.

This technology would also allow for more home-based energy storage, as appliances could communicate and determine the most efficient time to charge or discharge batteries based on their power requirements.

As power grids ensure adequate generation and distribution of power, it is essential to increase their flexibility and improve the integration of renewable sources. The following are ways to do it.

Demand-side management (DSM) modifies consumer energy usage patterns through pricing structures or an advanced metering infrastructure, which can create incentives for consumers to cut electricity use during peak demand periods.

This is achieved by incentivizing consumers to use energy during specific periods or reducing consumption at large industrial sites. However, it does not always work efficiently because power grid operators cannot predict demand.

Due to the intermittent nature of renewable energy resources, such as solar and wind, power grids must transport around the clock to meet consumers' demands.

Energy storage captures electricity in devices that can be reused later when power demand exceeds supply.

Power companies are interested in energy storage because it gives them an alternative to conventional power sources when these sources are not available. It reduces their reliance on backup generation methods, such as hydroelectric dams and fossil fuel-fired generators.

Power grids can also use energy storage to provide continuity of supply and increase grid flexibility. Power grids can store electricity when demand and prices are low and sell it during increased demand periods at a higher price.

Power grids can place value on generator flexibility in the wholesale power markets.

For instance, California tried to manage its "duck curve" by developing a flexible ramping product that will compensate generators for their ability to ramp quickly.

Alternatives like this enable the market to decide how to allow the best flexibility instead of prescribing a set solution.

Combining different renewable sources allows them to maintain a constant output at any given time.

Power companies are interested in incorporating these sources because it lessens the impact on their grids when one source fails. It also makes forecasting electricity demand easier and provides more flexibility for integrating renewables.

For example, power grids can use wind farms at night and solar during the day. It ensures that an energy source is always available, increasing grid flexibility.

Power grids are necessary for the smooth running of power systems. They must respond to power system changes in real-time in order to continue to provide electricity to consumers.

1. What are power grids?

2. How do power grids work?

Power grids work by delivering electricity from where it is generated to end-users. Power grids distribute electricity as alternating current (AC) and high-voltage direct current (HVDC).

The smart grid is an upgraded power grid that can better accommodate the changing energy demands of emerging technologies, such as electric vehicles, renewable power sources, and microgrids.

4. What does demand-side management entail?

5. What are some ways power grids can increase grid flexibility and improve the integration of renewable sources?

Power grids can place value on generator flexibility, which allows them to buy units to ramp up or down depending on current conditions. More transmission lines should be built, and there should be more investment in demand-side management and combining renewable sources to increase grid flexibility.