What Is Renewable Energy?

Renewable energy sources are essential to maintaining society as we know it. Renewable energy comes from natural resources, such as sunlight, wind, rain, tides, biomass, and geothermal heat.

These sources are called "renewable" because they naturally replenish each generation.

Renewable energy resources are a vital component of sustainable development for the following reasons:

Renewable energy sources come in many types and from different sources. They are all great alternatives to traditional fossil fuels, but there are some things you need to know to understand their benefits. 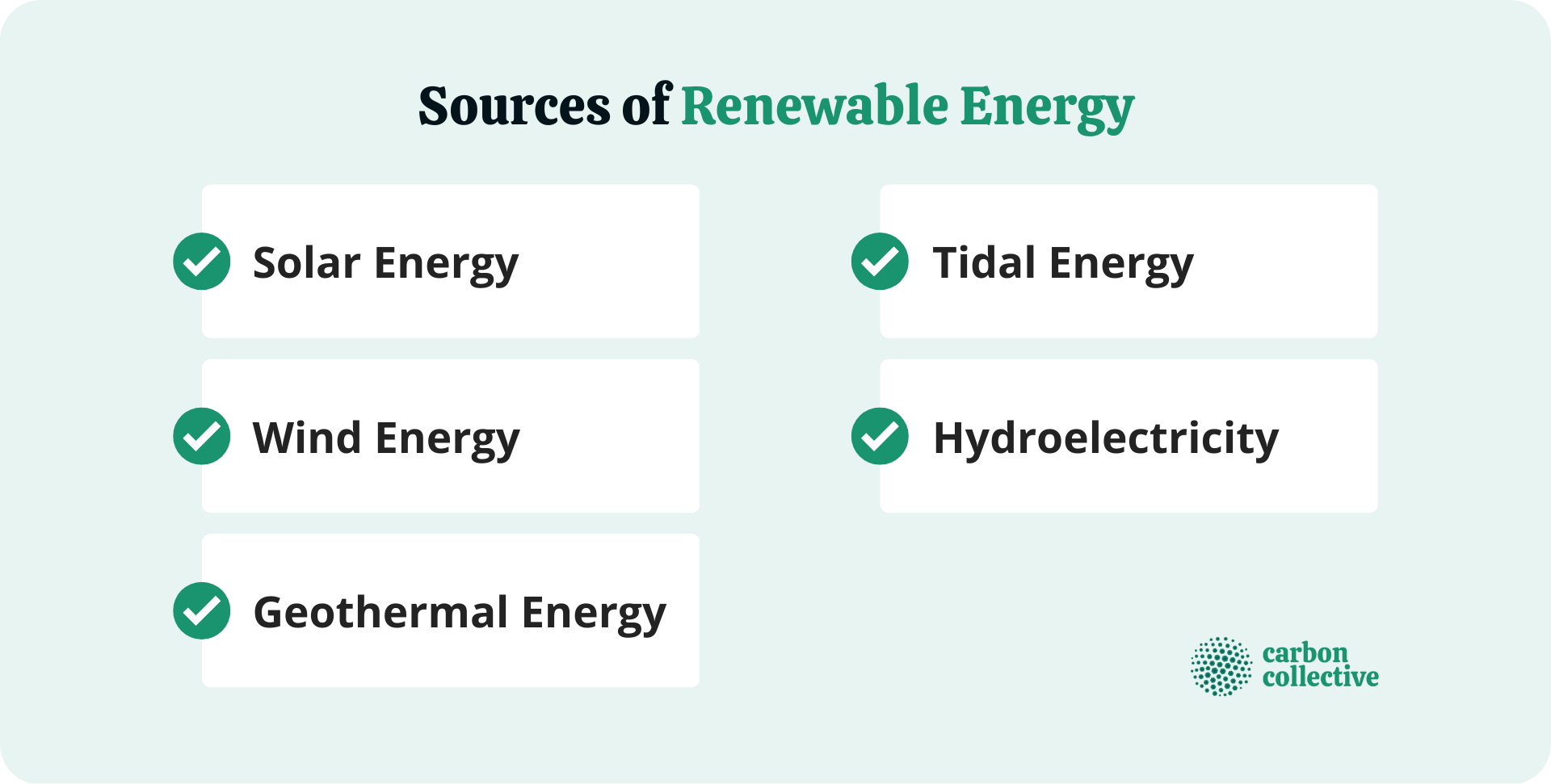 Sunlight is energy originating from the sun. Solar power uses solar energy by converting it into thermal or electrical energy. Photovoltaic cells are used for solar panels, which collect solar power. Solar energy can be used on dark, cloudy days because it does not need direct sunlight to function.

This energy originates from the wind. The way it functions is similar to solar power in that wind turbines transform the kinetic energy that comes from the moving air into electrical or thermal energy.

Even though geothermal energy is not considered renewable by some, it does come from the Earth. Geothermal technology is often used for heating and cooling in homes and businesses by transferring heat energy into or out of the Earth's crust.

This helps maintain a steady temperature year-round. The process works best in areas that experience freezing winters and hot summers.

Waves form from the wind, which causes tides to rise and fall. This process can be harnessed for energy usage by using underwater turbines connected to generators that collect the flowing kinetic energy of the ocean's waves.

The dams are built on significant waterways to collect the moving water, which flows through massive turbines that turn generators and create electricity.

Since renewable energy sources derive from natural resources, they can be replenished.

On the other hand, zero-emission energy sources do not release harmful emissions into the environment whilst producing clean energy, but they are not infinite.

Examples of zero-emission energy sources include:

Uranium is mined from the Earth and used to create nuclear energy. It requires careful handling because it can be hazardous if mishandled. Although nuclear energy produces no emissions, it cannot be reused once consumed.

This clean fuel does not emit harmful toxins. It can be produced with renewable energy or made with electrolysis, which requires electricity to split water into hydrogen and oxygen.

Once the hydrogen is used up, you have to create more through this process to use it again.

It can be made from coal or natural gas or when biomass creates synthetic fuels, which differ from biodiesel because biodiesel is made from organic matter. The process of generating this kind of fuel begins as a fuel out of carbon molecules.

Using wind and solar power does not produce harmful byproducts, such as greenhouse gas, carbon dioxide, and other pollutants.

Renewable energy reduces environmental costs and helps to save money.

A recent study has shown that using renewable energy can reduce electricity prices by as much as 87%, which represents huge savings for the consumer.

Renewable energy sources are beneficial politically since they help protect the environment.

Protecting the environment is a common goal for most countries, so using renewable energy sources can be readily agreed upon by governments around the world.

Although there are many pros that come with using renewable energy sources, there are also a few drawbacks. Some of these include initial costs that people may struggle to afford and how these costs might affect the economy.

One of the main disadvantages of using renewables is that they can be expensive to set up and maintain.

For example, solar panels cost over $75,000 to install and only last for about 30 years. Of course, long-term savings can help offset these costs, but people who live paycheck to paycheck may not be able to purchase and adapt to using solar panels right away.

Renewable energy can also affect how various industries, such as oil and gas, function due to their cost-effectiveness. Some believe that these changes will hurt the economy and result in job losses.

With continued research and development, renewable energy sources will continue to emerge as the most efficient way to power homes and businesses.

As more and more people become aware of the advantages of using renewable energy, it is becoming a mainstream source around the globe.

1. What is renewable energy?

Renewable energy is the electrical power obtained from natural processes, such as sunlight and wind power. This means energy cannot be used up because it comes from a natural or renewable resource.

2. What are the sources of renewable energy?

There are many sources of renewable energy. Some include solar, hydroelectricity, biomass, geothermal, and wind.

Renewable energy sources rely on natural processes, such as sunlight and wind, to produce power. Zero-emission energy sources do not emit harmful byproducts, such as greenhouse gas, carbon dioxide, and other pollutants.

4. What are the benefits of renewable energy sources?

There are many advantages of using renewable energy sources. These include environmental, economic, and political benefits.

5. What are the drawbacks of renewable energy sources?

Some of these include high initial costs and how they might affect the economy.