Depreciation is the cost that is allocated to a fixed asset over its useful life. In other words, the cost of the asset is spread over the useful life.

It’s a common misconception that depreciation is used as a way to “expense” an asset over time, but in reality that’s not what happens. Depreciation is recorded as an expense on the income statement, but it’s not an expense of the asset, it’s just a way to spread that cost over the length of the asset’s life.

Property, plant and equipment, except land, normally are usable for a number of years after which they have relatively little value either for service or for sale. The difference between the original cost of a property and any remaining value when it is retired or worn out is an expense that should be distributed to the periods during which the asset is used. The portion that is allocated to expense in a particular period is referred to by three different terms: depreciation, depletion or amortization.

Depreciation is defined as “the systematic allocation of the depreciable amount of an asset over its useful life.”

In other words, depreciation is simply a process of allocation and not of valuation. Depreciation is the portion of the cost or other amount substituted for cost allocated or charged as expense during an accounting period.

Depreciation is not so much a matter of valuation as it is a matter of cost allocation in recognition of the exhaustion of the life of a tangible property used in business operations.

The objective of depreciation is to have each period benefiting from the use of the asset bear an equitable share of the asset cost.

Depreciation in the Financial Statements

Depreciation is an expense. It may be a part of the cost of goods manufactured or an operating expense. The depreciation charge for each period shall be recognized as an expense unless it is included in the carrying amount of another asset.

Except for nonexhaustible land, all property shall be depreciated on a systematic basis over the useful life of the asset irrespective of the earnings of the entity.

The omission of depreciation may somehow impair legal capital if and when dividends are declared out of earnings before provision for depreciation.

Depreciation of an asset begins when it is available for use, meaning, when the asset is in the location and condition necessary for it to be capable of operating in the manner intended by management.

Depreciation ceases when the asset is derecognized.

Therefore, depreciation does not cease when the asset becomes idle temporarily.

Temporarily idle activity does not preclude depreciating the asset as future economic benefits are consumed not only through usage but also through wear and tear and obsolescence.

However, if the asset is “classified as held for sale” in accordance with IFRS 5, depreciation shall be discontinued.

There are two kinds of depreciation, namely physical depreciation and functional or economic deprecation.

Physical depreciation is related to the depreciable asset’s wear and tear and deterioration over a period.

Physical depreciation may be caused by:

Accordingly, physical depreciation results to the ultimate retirement of the property or termination of the service of the asset.

Functional or economic depreciation arises from obsolescence or inadequacy of the asset to perform efficiently.

Obsolescence may arise from the following:

Inadequacy arises when the asset is no longer useful to the firm because of an increase in the volume of operations.

For example, adequate buildings acquired at the inception of business may become inadequate or limited in their future service potential when unexpected business growth or expansion requires larger facilities for efficient operation.

Depreciable amount or depreciable cost is the cost of an asset or other amount substituted for cost, less its residual value.

Each part of an item of property, plant and equipment with a cost that is significant in relation to the total cost of the item shall be depreciated separately.

For example, it may be appropriate to depreciate separately the airframe, engines, fittings (seats and floor coverings) and tires of an aircraft.

Residual value is the estimated amount that an entity would currently obtain from disposal of an asset, after deducting the estimated cost of disposal, if the asset were already of the age and condition expected at the end of its useful life.

In other words, residual value is the expected worth of the asset in present pesos at the end of its useful life.

The residual value of an asset shall be reviewed at least at each financial year-end and if expectation differs from previous estimate, the change shall be accounted for as a change in an accounting estimate.

In practice, the residual value of an asset is often insignificant and therefore immaterial in the calculation of the depreciable amount.

Accordingly, the useful life of an asset is expressed as follows:

The economic benefits embodied in an item of property, plant and equipment are consumed principally through the use of the asset.

However, other factors such as technical obsolescence and wear and tear while an asset remains idle often result in the diminution of the economic benefits that might have been obtained from the asset.

Consequently, the following factors shall be considered in determining the useful life of an asset:

The useful life of an asset is defined in terms of the asset’s expected utility to the entity.

The estimation of the useful life of an item of property, plant and equipment is a matter of judgment based on the experience of the entity with similar assets.

Under the straight line method, the annual depreciation charge is calculated by allocating the depreciable amount equally over the number of years of estimated useful life.

In other words, straight line depreciation is a constant charge over the useful life of the asset.

The formula for the computation of the annual depreciation following the straight line method is as follows:

Examples of assets that depreciate principally because of the passage of time are buildings, other structures such as radio and TV towers, dams, bridges, and office equipment such as typewriters, adding machines, and computers.

Although use and obsolescence contribute to the depreciation of such assets, such causes are insignificant compared to the effects of time.

The straight line method is widely used in practice because of its simplicity.

The following data relate to an equipment acquired at the beginning of the first year:

A depreciation table may appear as follows: 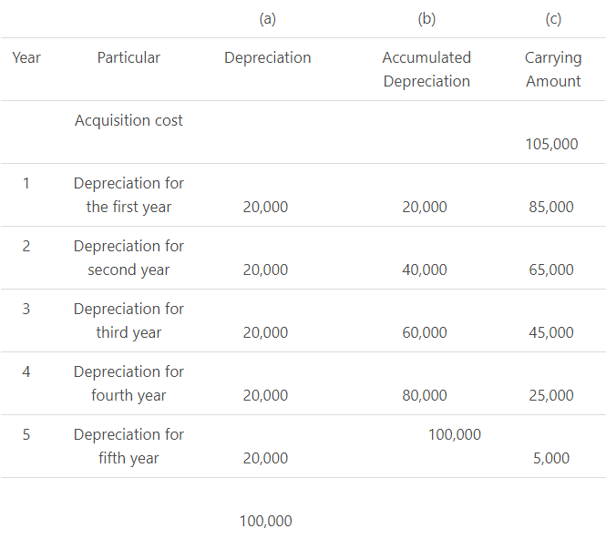 At the end of the life of the asset, the carrying amount should equal the residual value.

The residual value is P5,000 which is the carrying amount at the end of the 5th year.

The entry to record the annual depreciation is as follows:

The carrying amount is the amount at which an asset is recognized in the statement of financial position after deducting any accumulated depreciation and accumulated impairment loss.

Unexpected physical deterioration or technological improvement may indicate that the useful life of the asset is less than that originally estimated.

On the other hand, improved maintenance procedures or revision of operating procedures may prolong the life of the asset beyond the original estimate.

The useful life of an item of property, plant and equipment shall be reviewed at least each financial year-end and if expectations are significantly different from previous estimate, the change shall be accounted for as a change in accounting estimate. Therefore, the depreciation charge for the current and future periods shall be adjusted.

Depreciation method used shall reflect the pattern in which the asset’s economic benefits are expected to be consumed by the entity.

The depreciation method shall be reviewed at least each financial year-end and if there has been a significant change in the expected pattern of economic benefits embodied in the asset, the method shall be changed to reflect the new pattern.

2. What are the kinds of depreciation?

There are two kinds of depreciation, namely physical depreciation and functional or economic deprecation.

Physical Depreciation: This is the decline in an asset's physical condition and value due to age, wear and tear, and other factors.

Functional or Economic Depreciation: This is the decline in an asset's economic usefulness due to technological changes, obsolescence, or other factors.

3. Why do assets depreciate over time?

The most common reason for assets to depreciate over time is because they wear out or become obsolete. Other factors that can cause depreciation include natural disasters, fires, and accidents.

4. How does depreciation differ from amortization?

5. Why should businesses record depreciation?

Depreciation is an important accounting concept because it allows businesses to spread the cost of an asset over its useful life. This helps to ensure that expenses are matched with the revenues generated by those assets. It also provides a measure of how quickly assets are used up and need to be replaced.